What was once the Canet-en-Roussillon aquarium is now… Oniria

The Canet-en-Roussillon aquarium was built in 1983, occupying the 700 m² space of a former fishery. The aquarium was home to 1000 individuals from 350 exotic and Mediterranean species, living in 55 aquariums containing 170 cubic metres of water.
As time went by, the dilapidated building was no longer able to offer the residents of Canet-en-Roussillon and visitors to the area an experience that was on par with the rest of the facilities the town had to offer. A decision was then made to build a new aquarium that could accommodate all of the old aquarium’s existing visitors, and even attract more.

And so we came to have the new aquarium, known as Oniria. The building is five times the size of the old aquarium, now encompassing a space of 3500 m², and containing more than 1200L of water. The aquarium is made up of 83 tanks for the public viewing of more than 3500 individuals from 660 different species, spread across ten different habitats. 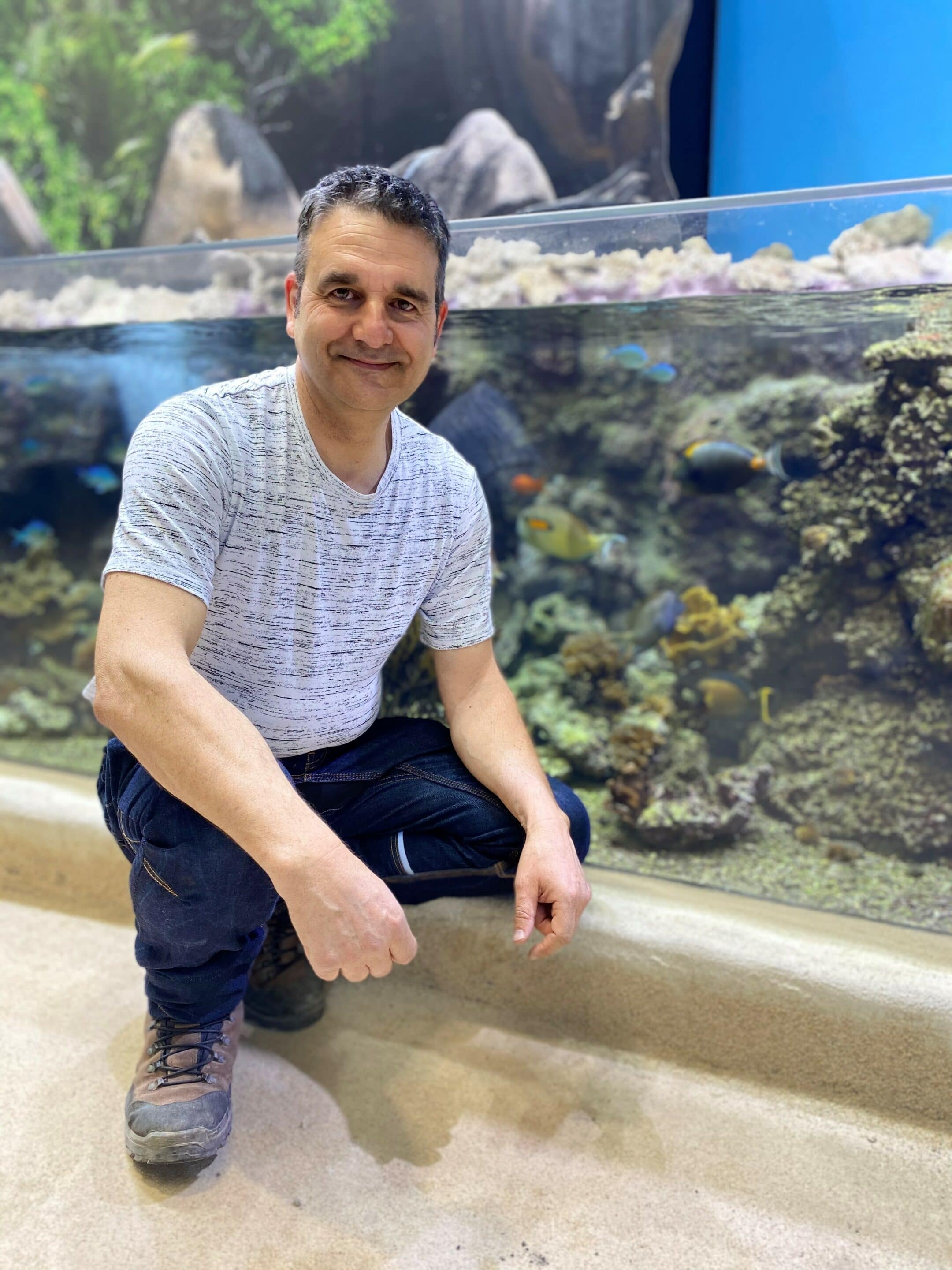 Named for a word borrowed from the Greek oneiros, meaning ‘a dream’, Oniria’s own dream is to serve as a wonderful space imbued with poetry, where the beauty of nature can find its fullest expression. The magical world that I first imagined more than 20 years ago is the one experienced by a droplet of water as it goes through the water cycle again and again, travelling the whole planet.
As a biologist and former employee of the Oceanographic Museum of Monaco, passionate about nature, I began dreaming up the Oniria concept from a blank sheet. After years spent observing and studying aquatic spaces, it was with a pencil, a ruler, and a rubber that I began producing the hundreds of sketches and calculations to reach the exact dimensions of the spaces, the layouts, and the blueprints – down to the nearest millimetre – of all the aquariums you will find here today.

After building a 3D model, my son, Adrien, put together a short film showing a virtual tour of the project. The film caused the project to explode, the originality of the story it told generating immediate interest. As far back as 2010 we already had a team at work, and were supported by the Mayor at the time: Bernard Dupont. The project’s continuity is guaranteed by the new team under the current mayor, Stéphane Loda, who has made known his involvement and commitment to the success of the project.
What I want more than anything today is to help as many people as possible to love and to understand aquatic environments. To do so would mean so much to me because it would help protect our blue planet and its most priceless treasure: water.
The result is a fun, educational, and scientific experience, and I am convinced that Oniria will amaze all who visit it.

PATRICK MASANET
HEAD SCIENTIST AND CREATOR OF THE ONIRIA PROJECT

The tourist attraction that showcases the old Aquarium’s living collection also includes the city’s collection of maritime models and new specimens obtained from the public sector, like large sharks.

As for the design of the building, it was entrusted to the visionary architect Jacques Rougerie.

For Jacques Rougerie, the project was an opportunity to combine his two passions: architecture and the sea. His research and projects are based on bionic architecture, and designed with sustainable development in mind. He has built homes, undersea laboratories, sea life centres, glass-bottomed boats, and underwater museums, and is working on concepts for underwater villages and living spaces so that everyone has a chance to experience the beauty of the sea, and the fundamental role it plays in human history.

Inspired from his earliest years by the works of Jules Verne, he adopted the maxim that, ‘Anything that one man can imagine, other men will be able to build’.

Stay up to date with progress on the new Oniria Aquarium

Follow the progress made building the new aquarium in images!

Go on a journey through a uniquely curated museum experience, as you follow the water cycle around the world and experience the awe-inspiring biodiversity of the varied habitats and ecosystems on show at Oniria.

LEARN ABOUT THE GREAT ENVIRONMENTAL CHALLENGES OF OUR TIME

Visitors can get up to date with current scientific research, to better understand the risks incurred by our lifestyles and consumer habits.

A MUSEUM THAT ELICITS EMOTION THROUGH ALL YOUR SENSES

SWITCH OFF FROM EVERYDAY LIFE

Get away from the stresses of everyday life out on our terrace with unbeatable panoramic views of the port and the beach, and enjoy the touch pool filled with species from the local area. There’s also a restaurant, ice cream stand, and snack bar to make the moment last longer.

Experience the thrill of an interactive experience with a whole range of special effects: snowstorms, an attack by a giant squid, immersive videos, stage effects, and much, much more.

Oniria is accessible to all and welcomes all people with disabilities, with support for the mobility impaired, hard of hearing, the blind, etc.

LEARN WHILE HAVING FUN

Oniria provides a range of tours with different approaches and perspectives. Fun, educational and/or scientific experiences with touch tables, quizzes, educational games, QR codes, documentaries, and even private tours in the company of an expert guide.

A PERFECT ACTIVITY FOR ANYONE, AT ANY TIME OF YEAR

Oniria is a perfect activity for any time of year, and for any kind of person. Open 365 days a year, through summer and winter, the aquarium is suitable for visitors of all ages.

FEEL YOUR HEART MELT FOR THE BABY FISH

Feel your heart melt for the baby fish, baby jellyfish, and coral nurseries. We offer direct contact with our marine biologists so that visitors can learn about what they do and the breeding programmes they run.

THE LOWEST PRICING OF ANY AQUARIUM OF THIS SIZE IN FRANCE

Our pricing policy makes us the least expensive aquarium of this size in all of France. Take advantage of our concessions policy for a reduced rate. And always make sure to check out our promotions!

Working as an aquarium keeper

Guaranteeing optimal quality of life for the species that call Oniria home, constantly working to improve it.

Leveraging their full expertise to offer the public a varied vision of the incredible beauty and diversity of the marine world, at a time when that same world is under threat from the activity of a single species: humans. 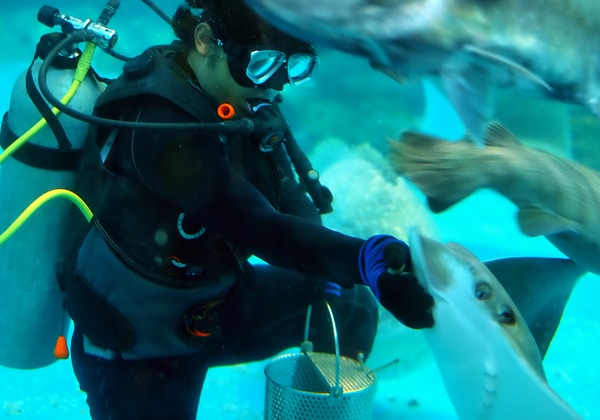 Working as an aquarium keeper is a passion and a vocation that requires skills in a wide variety of areas: